The iconic Singing Ringing Tree which stands high above Burnley on Crown Point Moor has been named in the top 10 pieces of ‘sound art’ in the world.

Author Trevor Cox has travelled the globe searching for bizarre sounds for his new book and has placed the Singing Ringing Tree among his top 10 in the world.

The physics expert and lecturer said the three metre panopticon, built in 2006, was ‘unique’.

Mr Cox said it ranked alongside other strange installations such as an orchestra made from vegetables in Vienna, Austria, and instrument made from ice in Norway. But the scientist got more than he bargained for when he visited the tree while writing his book, Sonic Wonderland: A Scientific Odyssey of Sound.

The 46-year-old said: “The day we went, it was so windy it was hard to stand up. “I suppose it’s quite ironic that it was too windy for a sculpture designed to work when it’s windy. “It’s unusual and unique in that it is a permanent piece of sound art. I would definitely encourage people to go and have a look at it.”

Mr Cox, from Bristol, is professor of acoustic engineering at the University of Salford and has also presented science radio shows for the BBC. The Singing Ringing Tree, designed by architects Mike Tonkin and Anna Liu, won a Royal Institute of British Architects award.

Not all of its pipes create sound — some are just there to create its dramatic shape. The pipes that ‘sing’ create a choral sound, which can only be heard at close range on a breezy day. Mr Cox added: “We got a few high-pitched squeals out of it but I’d like to go back when the weather is better.” Mr Cox’s list was featured in national newspaper The Guardian, resulting in a picture of the Singing Ringing Tree appearing on the front page of the online edition. 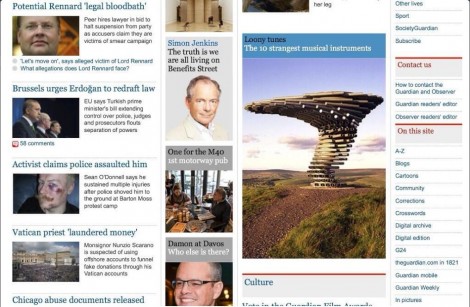